Are you interested in how a nuclear power plant exactly works? We will take you through the whole process: from nuclear fission to electricity.

A nuclear power plant works to a large extent like a classical thermal power station. Only the heat is produced by nuclear fission and not by the burning of coal, natural gas or biomass. The heat released by nuclear fission is converted to steam, which drives a turbine and thereby causing an alternator to rotate. This alternator transforms the mechanical energy into electrical energy.

All matter consists of atoms. These atoms consist of a nucleus, with electrons orbiting around it. The nucleus itself is composed of protons and neutrons. In a nuclear reactor, thermal energy is released by splitting the nuclei of heavy atoms, such as uranium. This is done by bombarding them with neutrons. At every fission, 2 or 3 neutrons are released. They in turn cause new fissions and thus provide a chain reaction.

In a nuclear reactor it is important to control this chain reaction. After every fission, only 1 released neutron must cause a new fission. The surplus of neutrons in the reactor must therefore be absorbed. This can be done by adding boric acid to the water in the reactor vessel and by lowering control rods into the reactor. By dropping all the control rods at a time, the reaction is shut down within 1.3 seconds. 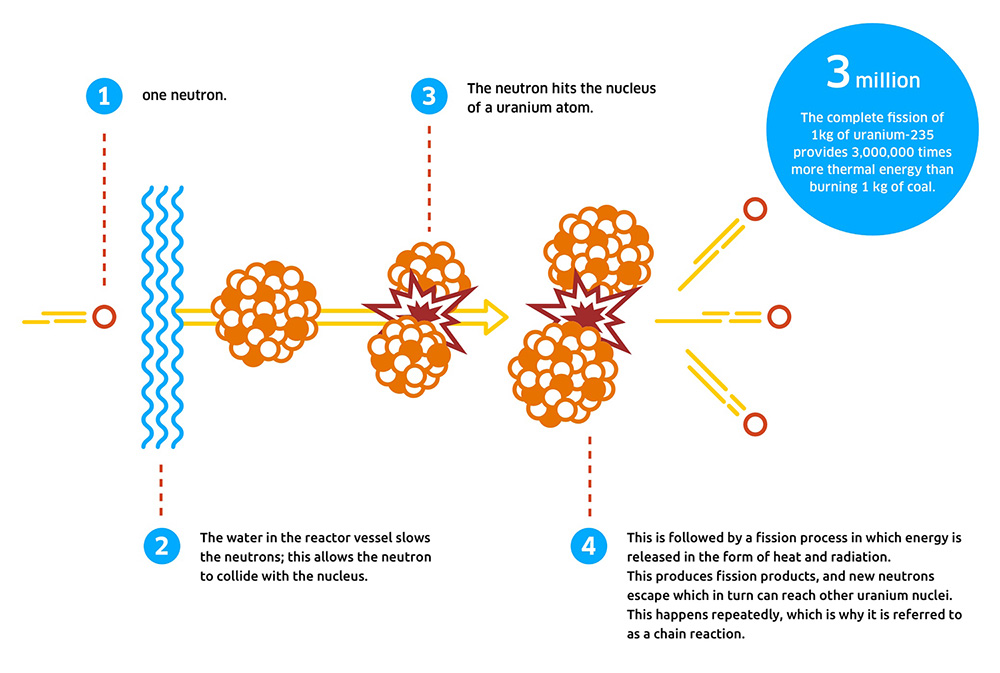 How does a nuclear power plant work?

A nuclear power plant with a pressurized water reactor (or high-pressure reactor) as in Doel and Tihange has 3 completely separate water circuits: a primary circuit, a secondary circuit and a tertiary circuit.

The nuclear power plants at Doel and Tihange use uranium as fuel. In nature, uranium exists in 3 forms: 99% uranium-238, 0.7% uranium-235 and a small amount of uranium-234. The nucleus of uranium-235 is fissile,that of uranium-238 is not. The uranium mixture extracted in the mines is enriched until it contains about 4% uranium-235 That is the ideal concentration for a chain reaction.

The reactor equipment is a large steel vessel with thick walls, in which the fuel rods are located. These are filled with small fuel pellets of uranium oxide. The rods are placed into the reactor in bundles. The heat released during the fission of the uranium nuclei is absorbed by the water of the primary circuit. This therefore heats up to a very high temperature. The pressure control vessel keeps everything at high pressure so the water does not boil or form steam. Hence the name high-pressure reactor.

The hot water is then led to a heat exchanger, a so-called steam generator. This is a cylindrical tank with thousands of pipes in reverse U form. The water runs through these pipes and gives off its heat to the water of the secondary circuit, which flows along the outside of the pipes. This heats up and changes into steam. Once the water of the primary circuit has delivered its heat, a pump then moves it back to the reactor.

The steam coming from the steam generators drives one or more steam turbines. These consist of a series of blades mounted on a shaft. Due to the high pressure of the steam, the shaft rotates very quickly. Thus, the turbine drives an alternator, which ultimately produces electricity. A little like the dynamo of a bike. Transformers increase the voltage at the outlet of the alternator to transmit the electricity to the consumers with the lowest possible loss. 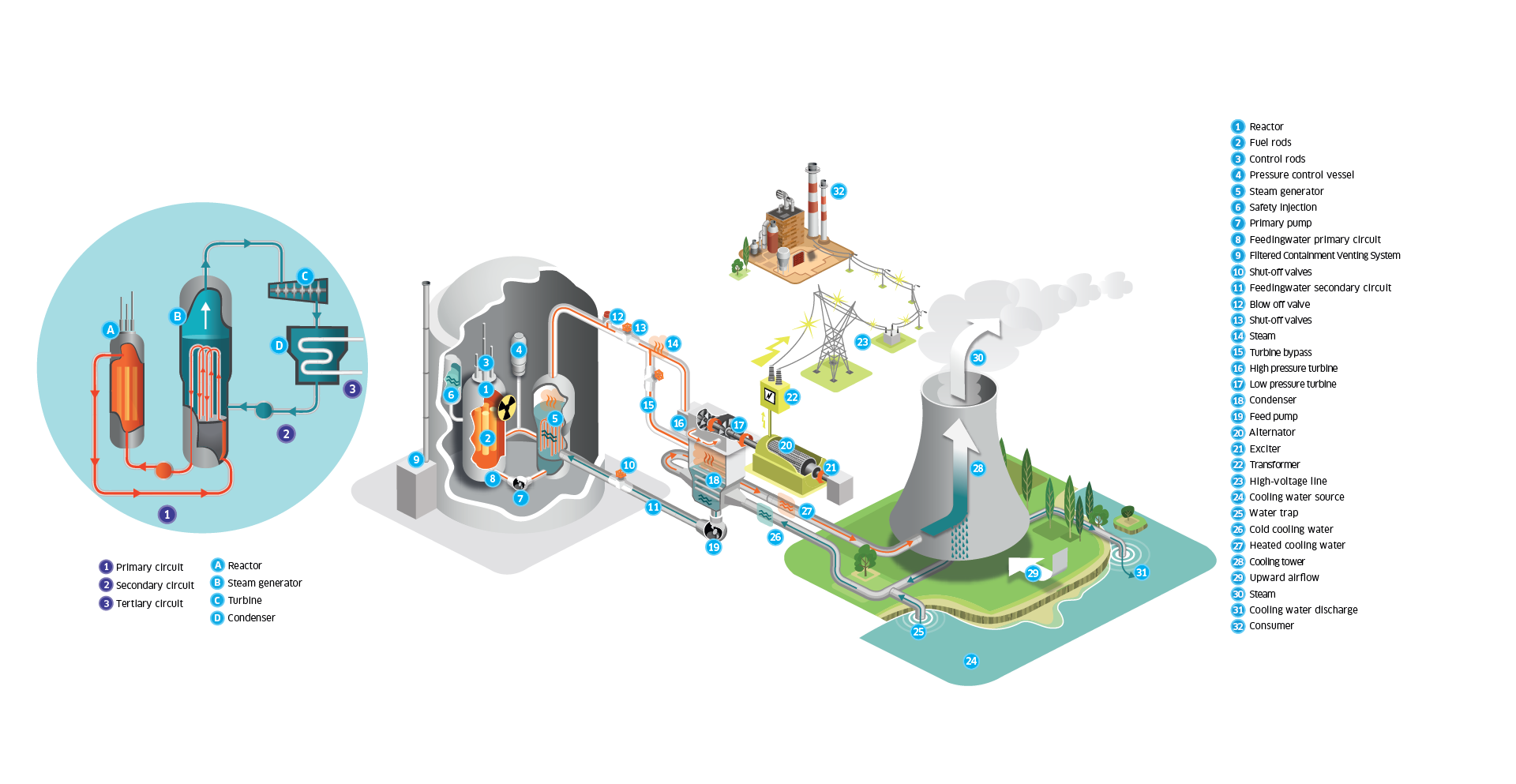 You can also find more information on the website of the Nuclear Forum.