During a major overhaul of the Doel 3 power station in 2012, due to the application of a more extensive ultrasonic measurement technique, contamination in the reactor vessel was discovered, and later also in the vessel of Tihange 2. Electrabel then itself decided, as a professional and responsible operator, to stop the power stations and take the time to analyse the situation thoroughly.

After research it turned out to be hydrogen inclusions, a known phenomenon in metallurgy. These inclusions were incorrectly called 'cracks' in the media.

After years of tests, analyses and studies, international scientists and the competent inspection authorities agreed that the hydrogen inclusions were present during the forging of the reactor vessels and are not evolving. In addition, these hydrogen inclusions under no circumstances had an influence on the reactor vessels. The Federal Agency for Nuclear Control therefore authorised to start up the power stations in 2015 in full safety. Additional measures and follow-up inspections were / are carried out preventively to monitor and track the state of the vessels continuously. All this in total transparency and under the control of the Federal Agency for Nuclear Control. The follow-up inspections already carried out confirm that the hydrogen inclusions are not evolving and the reactor vessels are therefore safe for further operation. 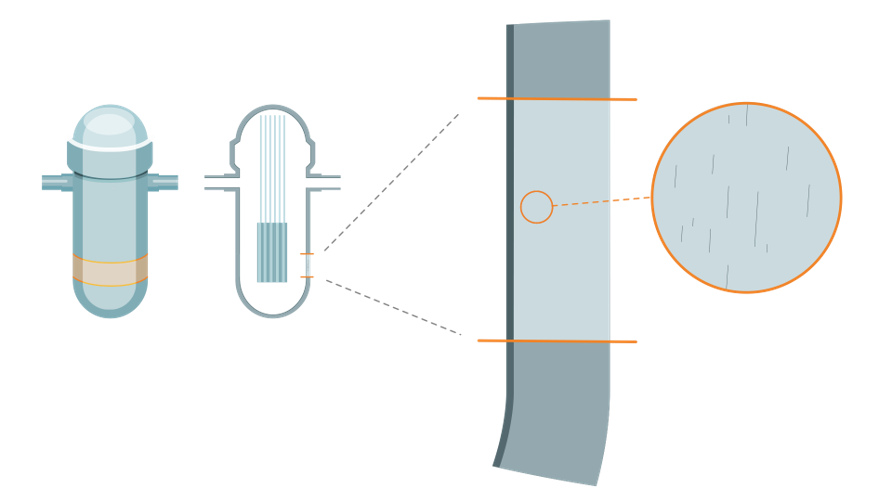 The discovery of hydrogen inclusions, a reconstruction

During a major overhaul of Doel 3 in 2012 an inspection of the reactor vessel was carried out using ultrasonic equipment. This type of inspections already took place in the past, but in 2012 Electrabel decided to inspect the entire reactor vessel, irrespective of the required statutory checks on parts of the vessel, following a phenomenon which occurred a French power station. (see photographs below: ultrasonic measuring device in reactor vessel).

The phenomenon from the French power station was not identified in the reactor vessel of Doel 3 but certain impurities were identified and later in the Tihange 2 power station. After detailed research it turned out to be hydrogen inclusions, a known phenomenon in metallurgy. These inclusions were incorrectly called 'cracks' in the media.

How do hydrogen inclusions occur?

Hydrogen inclusions arise when certain gases such as hydrogen are released into the steel when the steel is cast or forged. Using a correct forging process, most of these gases are forged out. 40 years ago – during the forging of the reactor vessel of Doel 3 and Tihange 2 - not all hydrogen was removed from the steel, which caused hydrogen bubbles. These were subsequently “rolled flat” when the reactor vessel was made. So, therefore, small, flattened flakes were formed which are now in the 20 centimetre thick wall of the vessel. They are 12 to 16 mm long on average and their thickness is similar to that of a cigarette paper. They do not evolve over time and run parallel to the inside wall of the vessel. Therefore, they are subject to restricted mechanical stresses in the reactor vessel. Material tests have shown that these hydrogen inclusions in no case and under no circumstances  [VB1] affect the integrityof the reactor vessel.

This conclusion is based on detailed research, unique in the world, carried out by a multidisciplinary team with experts from Electrabel, Laborelec and Tractebel Engineering. During the whole investigation phase this team worked with different externally renowned, independent organisations both in Belgium and abroad such as the SCK•CEN (Belgium), CEA (France), UGent, CRM (Belgium), Tohoku University (Japan), VTT (Finland), ROT (Finland), Raid National Laboratory and Sandia National Laboratory (USA) etc. The result of the deployment of these dozens of experts, the 10,000s of hours of investigation and the more than 1500 material tests is a world first achievement.

On 17 November 2015 the Federal Agency for Nuclear Control (FANC) gave the green light for restarting the reactors at Doel 3 and Tihange 2. The Federal Agency for Nuclear Control (FANC) concluded among other things that the utilized ultrasonic inspection method is highly reliable, the inclusions were formed during the forging of the reactor vessel, that the inclusions are not evolving over time and the strength of the reactor equipment remains assured in all circumstances, both when the power station is operating and in an incident, and this with large safety margins. Nevertheless, the FANC demanded that Electrabel should perform new inspections of these reactor vessels at regular intervals so that it can always be confirmed that the inclusions are indeed not evolving.

Specifically the first follow-up inspection should have taken place during the first subsequent maintenance shutdown following the restart of the power stations in 2015 and thereafter every 2 maintenance periods. In the past years, these inspections were always done correctly and the results were reported to the Federal Agency for Nuclear Control. After the follow-up inspections in Doel 3 and Tihange 2 on its website the FANC published the main conclusions of its evaluation and did not raise any objection to the re-start of the reactors for the next fuel cycles. The results of the ultrasonic inspection were analysed through a method which the safety authorities approved. The analysis showed that no evolution of the hydrogen inclusions was identified. There are no new indications, whereas the existing indications are not growing.